Yara and Matt Amberg had a three-pronged plan after they married, when both were cooking at high-end New York City-area restaurants. “We wanted children, a nice house and our own restaurant,” Matt Amberg said. “It didn’t seem feasible up there, so we had to go to Israel, where Yara is from, or Tulsa, where I’m from, to raise a family. We chose Tulsa.” Amberg said financially it wasn’t a goal they could reach immediately, so he cooked at Stonehorse Café in Utica Square for two years while keeping his eye on possible restaurant locations. “The final part of our plan finally happened,” Amberg said. “It just took two years to do it.”

Amberg recently opened Oren in the Center 1 building in Brookside. The space formerly held Ming’s Noodle Bar, The Brasserie, Monte’s and Montrachet, though there is little evidence that those restaurants ever existed. The dining room formerly was full of dark woods and French-style accents. The Ambergs have transformed it into a light, bright space with clean, modern lines. “I hate to go into a restaurant where it is so dark you can’t read the menu,” Amberg said. “We don’t consider ourselves fine dining. We’ve lightened up the room and play an eclectic mix of music. It’s not elevator music.”

The music was a little faint to hear the night we visited with a daughter and son-in-law, but we did appreciate being able to easily read the menu. Amberg might not consider Oren a fine-dining restaurant, but that has to relate more to ambience than food because the dining was, to borrow a term from another era, super fine. The fruit- and vegetable-driven menu, which Amberg terms progressive American, usually changes daily, depending on what is fresh and available.

“In the kitchen, we always are talking about what to do and how to do something creatively,” he said. “The ideal would be to come with a group and share as many dishes as you can.” Amberg said he already has seen a group of eight order every dish on the menu, which would come out to about three dishes each, ranging from $6 to $36. The majority of the menu features appetizer-sized dishes from $6 to $15. We couldn’t match the table of eight production, but we managed a nice assortment of dishes to share, and all were extraordinary.

For our main dishes, we chose ricotta gnudi ($16), beef short rib ($18), halibut ($30) and New York strip steak ($34). Gnudi sometimes is described as stuffed ravioli without the ravioli, and that’s pretty close. Creamy ricotta cheese balls with Meyer lemon, Parmesan and garlic were delightful with a perfect balance of ingredients. Short ribs have become a darling of wine dinners, probably because they are relatively inexpensive and can be slow-cooked until the meat is tender and flavorful. Whatever, I’ve always been a fan, and our short rib dinner was tender and tasty with a salty edge. The beef sat amid a mix of cavatelli pasta, Hon Shimeji mushrooms and sea beans (a somewhat salty sea plant).

The halibut was amazing. It was a thick fillet, cooked to a perfect texture and topped with black olives, fennel and herbs. It sat over a reddish, tomatoey sauce filled with sliced yellow squash and zucchini. It seemed like a lot going on, but no one item dominated the others. The steak was cut into slices and was a beauty. It was ordered medium and came out closer to medium-rare, which to me was superior. It came with roasted tomato, spinach and ratatouille jus.

Among the smaller dishes we shared were a peppery, minty arugula salad ($7), a dozen small marble potatoes with miso, pickled mustard seed and buttermilk ($8) and five corn croquettes with jalapeno, blueberry and maple flavorings ($8). The salty miso with the buttermilk took the potatoes to another level, and the fried corn croquettes — crispy on the outside and creamy inside — were to die for. I probably could live on those two dishes for some time and not get bored.

We were told the cocktails, under the direction of bar manager Read Richards, were special. “His menu is fluid in more ways than one,” Amberg said. “For instance, if we bring in Thai basil, we ask him what he can do with it at the bar.” The ladies at our table chose a glass of wine, while the men selected a little number called Here’s Looking at Yuzu ($10) that included gin, elder flower-flavored St. Germain liqueur, orange bitters and yuzu. Yuzu is a citrus fruit about the size of a tangerine mainly cultivated in Japan, Korea and China. It’s highly fragrant, as well as sour and tart, and obviously played a big part in this cocktail. The taste of the cocktail is difficult to describe, except it was anything but sweet and was strangely memorable. I loved it. The bar also has “grown-up” cocktails minus the alcohol available. Fans of well-known bartender Liz Taylor-Pounds should be aware she is at Oren on Friday and Saturday nights. She’s at Amelia’s downtown Tuesdays and Wednesdays.

Oren just started lunch service Tuesday, which is a great excuse to go back and see what is happening with that menu. Our server, Susanna, was personable, answered our questions and had that knack of being around only when you needed her. The pleasant back patio has a limited bar menu (no utensils needed) and full bar service.

“The performance in the kitchen and among the waitstaff has exceeded expectations,” said Amberg, who personally inspects almost every dish as it comes out of the kitchen. “And we’re just happy to have people show up and dine here and give us the reviews they have.” 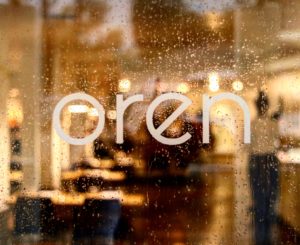